We drove down to the Champagne region, from Frankfurt. It was an easy, comfortable and FAST (180 km per hour average!) drive.

As we neared Epernay, we saw lush and perfect fields. So perfect – that they looked cloned. Huge rolling lands of green and yellow. Small thatched roof homes, stashed at the corner of these fields, flanked by what were definitely light forests.

I took in mighty breaths and have stored it inside me for times to come, when I faced my polluted smoky city once more.

We stayed in the Jean Moet hotel. Very central, and bang on the Avenue De Champagne, where all the action was to take place the next day.

Epernay is one of the major towns of Champagne. There are three more. Reims, being the second most famous and the Capital. I think people flock to Epernay, because it has Moet and Chandon and Dom Perignon, which are perhaps the most famous of them all.

Epernay has, what is called Caves (pronounced as CAAVES) and that is where all the champagne is stored, after the first and second bottling. No producer shows the crushing and bottling process. All that takes place in the fields, which were close by but not open to public.

The caves, have bottles of champagne – the ones which are first bottles. And the final bottles lot too. The first bottles are juice of various blends of grapes, and infused with yeast. These are then stored like this.

The three varieties of grapes used are – the best – Chardonnay, the Second best Pinot Noir and the one used in least quantity – Pinot Meunier. While Chardonnay is white grape with white juice, the other two are black grapes with white juice.

Vintages and non vintages are defined, by the quality of grapes, seasons, fermenting process!

It’s a hugely complicated, scientific and intriguing process. Lot of delicate balances, and defined palates go on to make a good champagne.

Ofcourse you know that Champagne comes only from the Champagne region. The rest are NOT CHAMPAGNE as we were very fiercely told by the producers.

BTW Champagne was first produced by Dom Perignon – a monk!

The Caves we visited were – George Cartier. And Mercier. 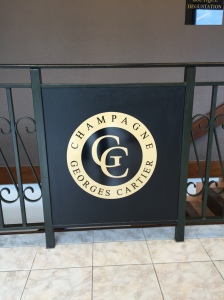 Please see it in that order. George Cartier is a small (if 3 million bottles is small) producer. The tour was very, very informative. Small and personal, and all the knowledge I gained, was from there. Do reserve through your hotel or tourism office.

Mercier all show. How great Mercier was, all that he did. Its like a drum which goes Mercier, Hail Mercier!! Jai Ho Mercier!! But having said that, its also very interesting. Their caves are way huger, and they have a train running through it.

But you cannot stop and take pictures, ask questions, peer at the bottles, feel the moisture on the walks of the cave, jump through water puddles, and basically inhale the entire history that cave has made, during the second world war and when men actually did by hand, for days, what machines now accomplish within seconds.

Ever so often, I get an order, which moves me to anguish. When a customer wants a dish, known and relished for its high potency in garlic, to be made Jain – aka – no onion, no garlic, sometimes no ginger!! At these times I go completely silent on the phone. My brain leaks out and I break out into sweat. Sometimes I even start blubbering and tear out clutches of my hair!!

THIS IS EXACTLY WHAT HAPPENS WHEN YOU ORDER VEGETARIAN IN EPERNAY!!!

So unless you all are non-vegetarians, I recommend only one day in Epernay.

DRINKING Each tour, offers you tastings. Its awesome. And there are lots of Champagne Bars around.

We went to Jannison Baradon, close to the hotel. It was Excellent. The George Cartier cave also has a bar with small eats.

And that’s Champagne for you!!

Limburg is a small village in Germany. Picturesque as villages go. 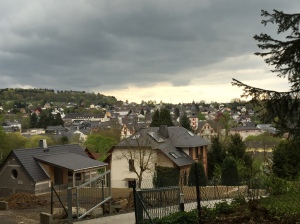 One is handed a glass, which you have to hold on to. Then you make your way to the various stalls. Some of them have the normal 18 year olds, but some stalls have fantastic older bottles, (and at a good wholesome, pocket breaking cost, I might add!) and every sip penetrates your skin and blood.

One day is enough. Actually for me one hour was enough!!

It’s very, very crowded as it’s held in a building. Though the weather was nippy, it quickly got very claustrophobic and uncomfortable. Proper food and water was not available. Well it was – but no one knew where!

So go with a huge bottle of water and after a even huger breakfast! Ummm! Taking a party smart is also a good idea!

Places to stay are not great. Very average!

Food for a vegetarians = bull shit!

One day is enough!

But definitely an experience. Must do it once. Whats not to like about one day of extreme drinking!

Mahabaleshwar. Where We meet Mariwala uncle.